DONATE
TICKETS
SUBSCRIPTIONS
E-BLAST
Menu
History of Canton Symphony Orchestra
Enjoy this collected archive of past events of our great organization. It spans every decade since we were founded, and we will continue to add to it as we organize our physical archives.

If you have something to contribute, please email nmaslyk@cantonsymphony.org
1930

The orchestra is incorporated, and Richard Oppenheim is named its first Music Director.

The Canton Symphony Orchestra Association was incorporated in 1938. Richard Oppenheim, a professor of violin at Mount Union College, was invited to form the orchestra. He held auditions and selected 70 musicians to make up the orchestra.

This orchestra operated somewhat differently from other community orchestras mostly in the fact that the members were paid for their services. This created a sense of discipline and professionalism among the players.

This first concert was free to the public and took place in the City Auditorium, before a crowd of ~3,300!

75 years later to the day, the orchestra will perform the same program (however with all 4 movements of Scheherazade, and no Tchaikovsky)

First concert for which admission was charged.

Mr. Vogelgesang was a child prodigy who began studying the violin at age 4. He graduated from the Curtis Institute of Music where he was a student of Efrem Zimbalist. At 18, he was the youngest member of the Philadelphia Orchestra. He also became the orchestra’s official pianist.

During his career, Mr. Vogelgesang was also a member of the Denver Symphony, NBC Symphony, CBS Symphony, Metropolitan Orchestra, New York Philharmonic, New York City Ballet, American Symphony and the New York City Opera, where he played for almost 30 years. He worked with Arturo Toscanini, Leopold Stokowski, Eugene Ormandy and Leonard Bernstein, who had also been one his classmates at Curtis.

He also conducted at the Roxy Theatre and Radio City Music Hall and for many Broadway shows. During World War II, he played French horn with the U.S. Air Force Band.

Mr. Vogelgesang made many recordings throughout his life, playing violin, piano, viola and French horn, and perhaps his most famous recording was of the Brahms horn trio in which he played all three parts himself. He was also a music teacher and coach.

Soprano Genevieve Rowe is a guest artist with the CSO

A special greeting from the orchestra

Dennis R. Smith wrote the following (in The Repository) to the CSO:

"Your splendid efforts surely give
A better town in which to live.
You bring to us mid care and strife
Some of the better things in life."

An early editorial on the CSO, from The Repository

The day after a Canton Symphony concert featuring violinist Frederick Vogelgesang, which drew an audience of 3,000 to the city auditorium, this editorial appeared in The Repository:

“When the echo of the closing note in last night’s symphony concert lost itself in city auditorium, there was an almost tangible sense of civic pride.

What was an experiment two and a half years ago had become a soundly established institution in the community, assured of continued support.

Quality of its music, good from the outset, was measurably better this season than it was last season. The kinks that originally made preparation for concerts difficult are gone. Conductor Oppenheim has developed an orchestra from what was originally a crowd of musicians.

Congratulations to those who have had the vision and determination to give Canton one of its valued civic assets.”

Canton Symphony Association’s first “Symphony Ball” was on February 22, 1941. It cost a whopping $2 per couple to attend, with “dancing” and “entertainment.”

Music Director, Richard Oppenheim, is lauded heavily in this article as he prepares for the final concert of the season.

The first concert performed by the Junior Symphony Orchestra was to an audience of 1,000 at the Lincoln High School auditorium.

A reminiscence/journal entry written by Percy Grainger while in Canton in 1944.

Grainger returned as piano soloist during the 1947-48 CSO season, as well.

A thousand seats at tables, surrounded by a brick-walled garden, were supplemented by benches and chairs, bringing the capacity up to 2,000.

The orchestra’s first chapter comes to a sudden, and sad, close

Canton Symphony Orchestra’s first conductor, Richard Oppenheim, dies unexpectedly shortly before rehearsal. Orchestra members found him slumped, unresponsive, in his office.
Oppenheim’s death was a true tragedy for the organization and the people who served it. He loved it, and died doing what he truly loved. It was beautiful, in a way.

Canton Economist: “Save the Symphony”

Some interesting background on Lane from around the same time:

Louis Lane had never conducted an orchestra in 1947 when he auditioned for an apprenticeship with George Szell, legendary music director of the Cleveland Orchestra. The audition required each candidate to “shadow conduct” the first movement of a symphony by Mozart, Beethoven or Brahms. Lane chose Mozart’s Symphony no. 28 because he thought that Szell might not be familiar with it. (Eventually Szell recorded it.)

While Lane conducted himself humming Mozart’s themes, Szell followed along in the miniature score Lane had borrowed from the library at the Eastman School of Music,

where he was a graduate student. Szell then asked Lane to sit down at the piano and play Chopin’s “E-Major Etude”—in a different key. Having accomplished that daunting challenge, Lane was given an hour to orchestrate a Beethoven piano sonata. After he had completed about 30 bars, Szell voiced his approval and said “I think you will do.” That was high praise from the stern maestro with whom Lane was associated for the next 23 years as apprentice conductor, assistant conductor, associate conductor, keyboard player, chorus accompanist and music director of the summer pops orchestra. In addition to his work with the Cleveland Orchestra, he directed Lake Erie Opera Theater and the Akron and Canton symphonies.

Eugene List was a family man, through and through. His confidant and calm demeanor paired well with his expert playing skills.

Mischa Michakoff performs with the CSO

Concertmaster of the NBC Symphony Orchestra

Thaviu was the concertmaster of the Pittsburgh Symphony Orchestra. Notably, his father performed at the funeral of President William McKinley.

5,000 Symphony fans attended this free concert under a moonlight sky.

The Canton Youth Symphony is founded

Born in New York City, Charry studied piano and oboe at the Oberlin Conservatory of Music and received Bachelor and Master of Science Degrees in orchestral conducting from the Juilliard School of Music in the class of Jean Morel. His other conducting teachers were Hans Schmidt-Isserstedt in Germany and Pierre Monteux at his school for conductors in Maine. For nine years, Charry was assistant conductor of The Cleveland Orchestra under George Szell, whose biography he has written (published by the University of Illinois Press in 2011). 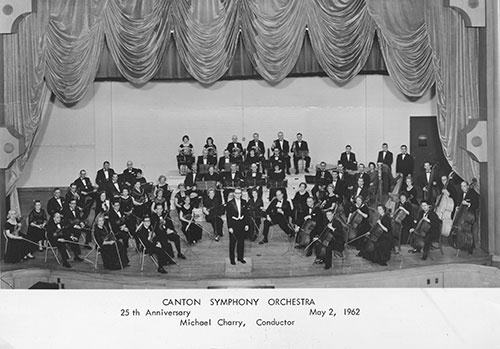 A Women’s Committee was founded in 1963 to provide service and fund-raising support for the orchestra. It is known today as the Symphony League of Canton. The League provides docents for the orchestra’s educational programs, ushers for its concerts, and fundraising for
the orchestra.

Young People’s Concerts were initiated in 1967 as part of the orchestra’s educational program, bringing classical music to children in grades 3-5.

The Cultural Center for the Arts is constructed

The Cultural Center for the Arts is unique in its architecture and in its purpose.  It is an award-winning designed complex set on more than nine acres near the downtown business and arts districts of Canton, Ohio. ArtsinStark

“Amahl and the Night Visitors” begins its 30+ year run

“Robert Marcellus is considered by virtually all clarinetists in North America to be the most influential clarinet teacher of the last half of the 20th century. He was a beautifully refined clarinetist and his recordings as principal clarinetist in The Cleveland Orchestra under Georg Szell are still recognized as the ‘measuring stick’ for orchestral clarinetists today.”

A nationally respected composer, a concert video of his oratorio “Haggadah: A Search for Freedom” was broadcast nationally and annually in the spring on Public Television, and he also conducted the Boston “Pops” Orchestra in his own compositions. He premiered his Piano Concerto with the Portland, ME, Symphony Orchestra in 1974.

Dave Brubeck & his sons perform with the CSO

The first Concert in the Park at McKinley Monument

As part of the bicentennial celebration of the United States, the Canton Symphony presented its first Concert in the Park at McKinley Monument in 1976, which became an annual July 4th tradition.