The following classroom materials can be used to enhance the concert experience by diving deeper into the topics discussed during the concert. All links and videos referenced in the learning materials can be found on this page. Photos have also been included so students can see them on a full screen.
Download Full Learning Materials Here

Learning Materials may look blurry on the computer screen but should print completely clear. If you have trouble, contact rhagemeier@cantonsymphony.org.

Modest Mussorgsky (1839-1881) was a Russian composer and a member of The Five, a group of Russian composers who came together with the goal to create a nationalist school of Russian music. Besides Mussorgsky, The Five included Aleksander Borodin, Mily Balakirev, Nikolay Rimsky-Korsakov, and César Cui.

As a young boy, Mussorgsky’s nurse introduced him to fairy tales. He credited his musical style to the influence these popular stories has on him. His mother was also an excellent pianist and gave him lessons. In 1849, when Mussorgsky was ten years old, his father took him and his brother, Filaret, to military school in St. Petersburg. Mussorgsky’s father was aware of his musical talent and sent both boys to Anton Gerke who, in the future, would be the professor of music at the St. Petersburg Conservatory.
In 1852 Mussorgsky began his first year at the School for Cadets of the Guard and by 1856, Mussorgsky had become a liutenant and joined the Preobrazhensky Guards. It was at this time, he met numerous officers who shared his love for music, including Aleksander Borodin. Later that year, Mussorgsky was introduced to other composers and had meaningful experiences at important locations in Russia.

By 1866, Mussorgsky’s artistic maturity could be seen with a series of songs about the ordinary people. After his mother died in 1865, Mussorgsky first lived with his brother, and then shared a small flat with Nikolai Rimsky-Korsakov until Korsakov was married in 1872. Mussorgsky became lonely with no one to share a space with. For a time, he stayed with a distant relative, Arseny Golenishchev-Kutuzov, until he was married as well. His close friend Viktor Hartmann (the artist who created the art that influenced Pictures at an Exhibition) died soon after which worsened his loneliness. On February 24, 1881, his health began to decline with three epileptic episodes. His health seemed to improve while at the hospital for a short while, but this did not last. He died shortly after his 42nd birthday, leaving behind a legacy of fantastic music. 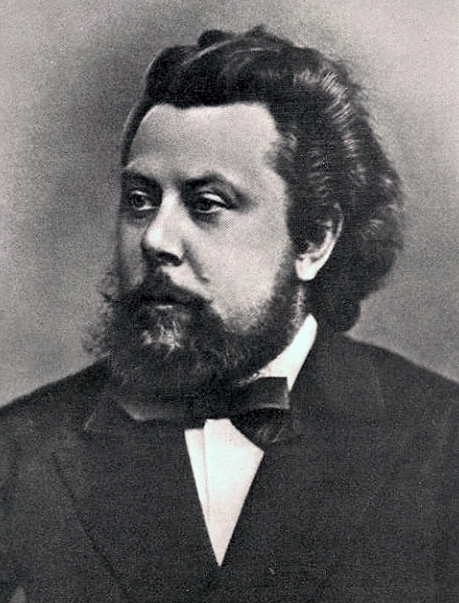 Viktor Hartmann (1834-1873) was born in Saint Petersburg into a family of German ancestry but was orphaned at a young age. He grew up with his aunt and uncle, Alexandre Hemilian, who was a well-known architect. Hartmann studied at the Academy of Fine Arts in Saint Petersburg and soon after began illustrating books as his first occupation. He also worked as an architect, painted watercolors, and sketched, among other things. He made most of his watercolors and pencil drawings on journeys abroad from 1864 to 1868. It is also worth noting that many of his works included traditional Russian motifs. One of his most prominent sketches was of the monument to the thousandth anniversary of Russia in Novgorod, inaugurated in 1862. Following Hartmann’s early death from an aneurysm at the age of 39, an exhibition of over 400 of his paintings was held in February and March of 1874 at the Academy of Fine Arts in Saint Petersburg. This exhibition of Hartmann’s works inspired Mussorgsky to compose his suite Pictures at an Exhibition in Hartmann’s honor. Unfortunately, most of the works that inspired the suite are now lost; however, their legacy lives on through Mussorgsky’s composition. 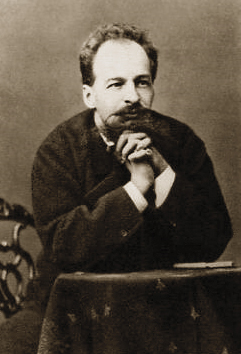 Composition Study: Pictures at an Exhibition

Pictures at an Exhibition is a ten-movement work composed by Modest Mussorgsky based on works of art created by his dear friend, Viktor Hartmann. The work was composed as a memorial to Hartmann after he died in 1873. After Hartmann’s death, Mussorgsky visited an exhibit featuring Hartmann’s art and wanted to recreate and share his experience by composing this piece. The work was completed in 1874, however, when Mussorgsky died in 1881, the piece had neither been published nor performed. Nikolai Rimsky-Korsakov, a friend and colleague of Mussorgsky’s, neatened the manuscript which enabled its publication in 1886. Unfortunately, the piece did not become popular until 1922 when it was orchestrated by Maurice Ravel, long after Mussorgsky’s death. Thankfully, today the beauty and excellence of Pictures at an Exhibition can be appreciated by all.

The suite opens with a “Promenade.” The word promenade means to “take a leisurely public walk, ride, or drive so as to meet or be seen by others.” Variations of the promenade appear in between almost every movement as if to illustrate Mussorgsky walking from painting to painting at the exhibition.
The first Promenade is followed by the first movement titled, The Gnome. Harsh intervals (tritones), chromatic scales, and sudden dynamic changes appear throughout to set a goofy and slightly tense tone. The painting that this movement is based on no longer exists, but music critic Valdimir Stasov commented that it was “a sketch depicting a little gnome, clumsily running with crooked legs.”

The Gnome is followed by another promenade and then the second movement called The Old Castle. The movement begins with an opening line from the cellos followed by a section where the melody bounces back and forth between a muted trumpet and a clarinet. Overall, the movement is legato, haunting, and beautiful, truly capturing Mussorgsky’s experience while viewing the painting of the old castle.

Next is another promenade followed by movement three, Tuileries. Tuileries (Children’s Quarrel after Games) is a very short movement and is dominated by a quick, light melody line. The movement has a light and airy feel, however, the mood shifts toward the middle to a slower, more legato and dreamy feel. It then returns to the same beginning mood and concludes with ending line fading through the orchestra. Though the painting that inspired this movement has been lost, it came from Mussorgsky’s time in France. Stasov commented that the painting was “an avenue in the garden of the Tuileries, with a swarm of children and nurses.”

Next comes Bydlo, or cattle, which is a slow, heavy movement where the low voices of the orchestra play a repeating pattern while a slow melody is played above, greatly contrasting Tuileries. It is meant to depict cattle lumbering slowly around a field. Although the painting inspiring this movement is also lost to time, one can imagine “a Polish cart on enormous wheels, drawn by oxen,” as described by Stasov.

Next is another promenade followed by The Ballet of the Unhatched Chicks In Their Shells. This movement was based on a sketch that Hartmann drew for costumes for the ballet, Trilby. It is very playful and light with short (staccato) lines from the winds dominating the movement.

Next is Samuel Goldenberg and Schumÿle a movement based on portraits of two men. One is only from the shoulders up with a blank background, and the other is a full body portrait of a man in what looks like an alley. The movement begins with all strings playing a harmonic minor scale with a few variations. Next enters a staccato repetition of notes going down in step wise motion. This is continued while the strings play the harmonic minor scale up and down with a few variations in the middle. It ends with every instrument playing together the very serious sounding melody.

Following Samuel Goldenberg and Schumÿle is the final promenade and then Limoges: The Market Square. This movement depicts a busy marketplace with lots of activity and chatter. It is a lively, vibrant, and exciting movement. This painting, lost to time, contained “French women quarreling violently in the market” according to Stasov.

After Catacombae comes The Hut On Hen’s Legs a movement about Baba Yaga, a sinister, supernatural figure within Eastern European folklore. The painting itself is an ornate clock with hens decorating the exterior. This movement evokes the sounds the bells of a large clock and the whirlwind sounds of a chase. The jerky melody and harsh intervals with little resolution keep the listener on edge, as if Baba Yaga is right behind them ready to pounce.

The final movement of the piece is titled The Bogatyr Gates (In the Capital in Kiev). It is often translated as “The Great Gate of Kiev” or “The Heroes’ Gate at Kiev”. This movement was inspired by a sketch from a competition to create a gate to be erected in Kiev. The purpose of the gate was to commemorate Emperor Alexander II’s escape from assassination. The movement is grand with a regal melody played by the brass section. This melody is contrasted by a sweet lyrical theme played by the woodwinds that is based on a baptismal hymn from the repertory of Russian Orthodox chant. The movement ends with suggestions of a large clock and the grand theme that slows to a breathtaking ending.

2: Ballet of the Unhatched Chicks

The Ballet of the Unhatched Chicks In Their Shells

The Ballet of the Unhatched Chicks In Their Shells